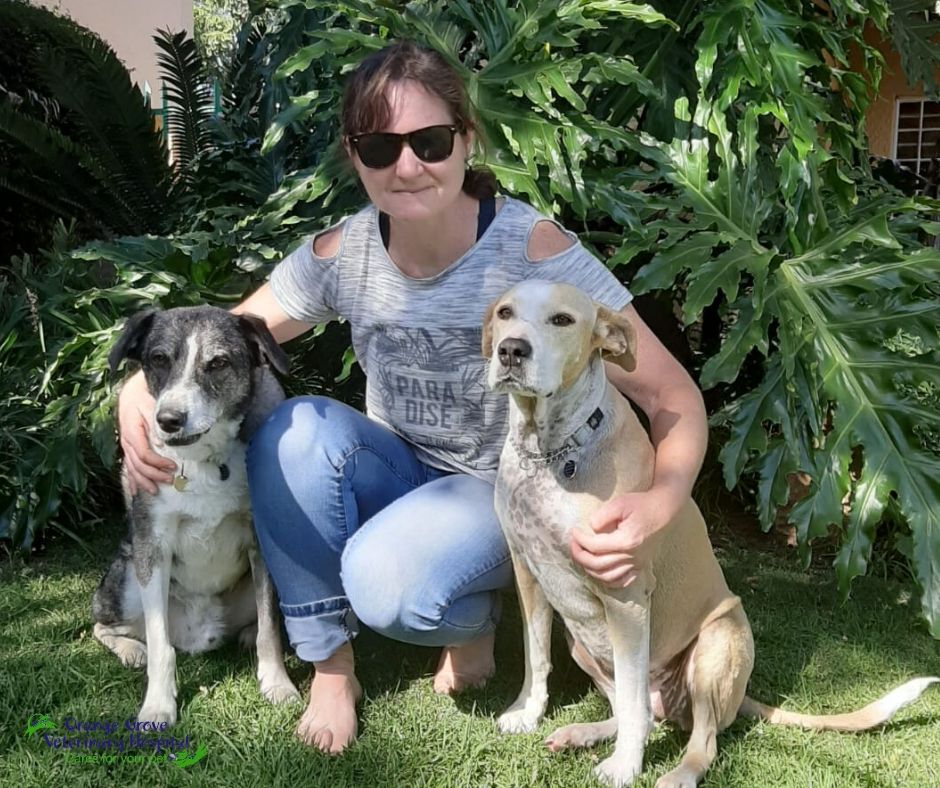 What does your pet mean to you? We asked this question to Dr. Dina Mannix, our vet about her two dogs, Honey and Shadow. Here is what Dina had to say:

“I adopted both Honey and Shadow when they were adult dogs from the local SPCA. Honey was adopted mid-year in 2013, and Shadow a few months later. I don’t have much history about them, other than Honey had recently had puppies, who had all been adopted. She also arrived with a scar on her face. How it happened, nobody knows.

I have even less history regarding Shadow. When I adopted him, I noticed he walked strangely. After taking X-rays I realised it was due to hip dysplasia. Over the years, I have ensured to keep him fit and trim, feeding him on a mobility diet. Unfortunately, as a senior dog, he does have arthritis but he still enjoys walks at the park.

Honey and Shadow both have such unique qualities. Honey is the attention seeker, always nearby. She is not shy to nudge you for tickles and loves being stroked. With Shadow, it is impossible to say no to him. He often uses his “doe or shadow eyes” to manipulate me into giving him treats. He loves eating ice and watching TV shows with animals (Honey doesn’t pay much attention).

Honey and Shadow are my dependants. I don’t consider them to be my “children” but I love them dearly and worry about them. I also tend to spoil them and when it gets colder, I always tuck them into their beds and under their blankets.

We have always enjoyed keeping active by going for long walks at Huddle Park. Even now, with stage 4 of the lockdown, we have still been able to go for daily walks in the neighbourhood.”

Share in the comments below what your pet/s means to you.

How to brush your pet’s teeth

It's the start of Pet Dental Month at Orange Grove